Our Chief Engineer, Cort, has been leading various LEGO Mindstorm-based CCA’s, teaching the basics of mechatronics with the constrained and limited world of EV3 kits.  Sure, the LEGO Education kits are a masterful creation and a gateway drug to all things STEM.  Don’t get us wrong – We love LEGO!

But, teaching a full STEM curriculum with JUST LEGO can be difficult for a creative engineer knowledgeable in a wide world of technology and fundamental science and math.  So, as one progresses from basic line-following, two-wheeled contraptions to original works of art and mechanical design it can get frustrating to look for a part that may or may not have been thought of a universal joint by LEGO designers, as incredibly awesome as they may be. 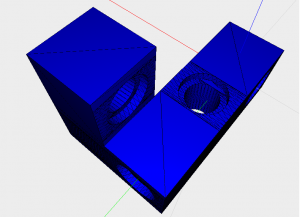 So, of course, Cort went forth and designed a simple tool for him to easily fabricate universal joints of his own and students’ liking.  The premise is that most of LEGO’s mechanical parts fit in a 3D grid of blocks with holes drilled in various dimensions, and parts that lock these bits into place with respect to one another.  Well, one sometimes just wants to take advantage of that world and enhance existing EV3 kits with non-existent parts that would enable them to put the LEGO pieces with respect to one another in ways cumbersome or impossible to do according to LEGO Mindstorm’s design, whether it was done on purpose or due to other limitations.  LEGO cannot sell every part of every type in unlimited quantities to every LEGO user, so we understand the conundrum.  However, we have found a solution!

We hope this is not trespassing on LEGO’s intellectual property rights.  If anything, we hope it enables LEGO designers to think creatively about their next expansion sets!  For instance,  instead of their usual expansion sets, maybe LEGO can get into the business of 3D Printers, colorful filaments, and pay-per-part or subscription-based libraries of simple LEGO parts…

Or risk the fate of Kodak.